This is the first book I have read on win loss analysis where Sales is the primary executor of this process. After all, Sales is the best source for sales intelligence as no one is more directly connected with your company’s customers. This is also the first book I have read where a company is using technology to collect customer intelligence from Sales which includes wins and losses. 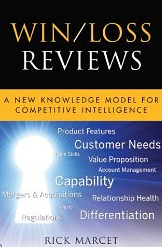 Win/Loss Reviews is real-time intelligence collection from selected sales events. It provides Microsoft sales, marketing and product mangers with early warning intelligence like no other win loss process out there. While there is incredible value from deeper interviews of your customers by a neutral third party, there is delay both in execution and the time to assemble good analysis, and get it to the right people.

Author, Rick Marcet describes how he established a scalable win loss process using technology that hangs off Microsoft’s sales force management system. This makes it easy for Sales to input their data, no more than 15 minutes per case. He refers to Sales' input as micro intelligence.

I particularly appreciate the psychological aspects Mr. Marcet weaves throughout this book to engage Sales cooperatively as so many in marketing and competitive intelligence fail to motivate Sales to share!

However, Sales is not the only beneficiary of this real-time intelligence and cumulative win loss database at Microsoft. Product management, product development, executives, and marketing can all tap into the collective “crowd wisdom” from this database, to help them make better decisions with timely information.

Just in case you are skeptical about Sales’ bias in reporting (We win because we’re great. We lose due to price.), Mr. Marcet has factored these biases within his database algorithms.

Thanks for the review, and I will read. You mention the bias which is good, but I'm more concerned with the accuracy of the perspective of the sales organization. I have found that sales is lied to all the time. Many times not only doesn't the saleperson know the true reason a sale wasn't made, but neither does their buyer. More times than not ( I wouldn't be surprised if it was over 75% of the time) it's a political reason that the sale wasn't made.

I've always looked at this as going to the desert for water. It's frustrating why so many of my colleagues insist on doing this. I would think that sales could be one data point, weighted very low. I'm sure that they could find other things to do with thier time though. It seams like such a waist to me. Win / Loss reports can be such an effeciant and effective practice, why would we invest in this data point? I find the only reason is that it's cheap, but we get what we pay for. Sales has always been the fast food of Win / Loss.

This is my thoughts going into the read. I'll let you know my thoughts coming out. Thanks again for the heads up.

I'll be interested in your thoughts after you read the book. I don't think that Sales doing win/loss works for every company, but they can work the win/loss angle more than you would think, especially in this competitive world.

The reasons it worked so well at Microsoft, according to Rick:

1. It's a technology company where competition is intense

2. It was set up with loads of Sales input, so this engaged them to participate

3. It was sold to Sales as a benefit as all the info is accessible to Sales, which means peer-to-peer review, which is what Sales values the most

4. Microsoft has a huge sales force, so you can imagine how many datapoints there are

5. Microsoft's culture is self-critical, and this feeds well into win/loss review

I do a fair amount of win/loss and ask for a brief about the situation from Sales, just a few lines. If they know why, they are often correct, but the answer doesn't include how the company felt about Sales and lacks the detail that I might collect. However, if they don't know why, often enough it's that Sales really didn't connect with the prospect, and their personality/chemistry isn't the only reason. I like talking to these people, since we learn the most from them. However, they are often the same people who "don't have time."

However, Rick doesn't contend just to use Sales for win/loss. This is also supplemented with more detailed info from interviews by other parties. I also like how Rick's win/loss review process uses technology so input is easy for Sales, and easy to access by other Microsoft employees, in addition to Sales.